Purple and Magenta Sky. It was beautiful!

On the morning of June 8, I was up earlier than normally, actually around about 4:00 A.M. Here during this time of the year the sky start growing lighter around 5:00 A.M. My kitchen and dinning room faces the east so it’s easy to see the sunrise.  I was in the kitchen drinking coffee mainly because I wasn’t feeling very well. I had my back turned to the window and suddenly around 5:22 the room filled with a beautiful array of purple and magenta; as if someone painted the room a lovely hue of purple and magenta.  I turned and looked out the window and the entire sky was blue, purple and magenta. I have seen this in photographs but never seen it in reality.

But I noticed something unusually, there were three glowing orbs lined up right beside each other. I ran and got my camera and tried to get a picture of them but was unable to but I did capture a fragment of the colors for they were fading so quickly. I’m not a sky observer nor a professional photographer. My camera is mainly for taking pictures of things on the ground I like that I can use as a bookcover.

I did researched and found information where it said the three orbs were Venus,  Mercury, and Jupiter but I don’t know how they were supposed to have appeared but they looked the same size to me. Lined up three in a room. I know Jupiter is much larger and much further away so perhaps appear the same size as Venus and Mercury.  I know that Venus is usually seen in the evening sky not the morning sky.

Two disappeared as the sun rose but one remained. It’s said that was normal. That Mercury disappears fast.  Boy! Didn’t it. It seems like the sun shot up so quickly I had to turn the camera away.  The two pictures are only minutes apart that’s how fast the sun rose.

I’m not a UFO specialist, or nor I’m not even sure if I believe in UFO’s. But the sighting was beautiful whatever it was. I wished it has lasted longer. Maybe there’s an Atmospheric scientific name for the phenomenon and if anyone knows I would appreciate if you let me know. 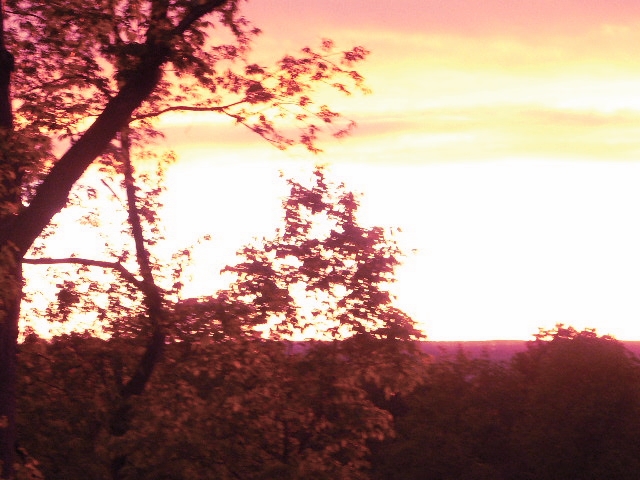 A. White, an award winning former librarian, who is also a long time member of Romantic Time and Publisher's Weekly. A. White has been writing for over fifteen years. She took classes in creative writing in college, specializing in ancient myths and legends. and later at a local community center while living in Chicago. In college she won the national contest to verbally list every country in the world, it's capital and ingenious language. Her works are mainly horror, fantasy, extreme, and sci-fi as well as, as some may says, "the truly strange predicament and puzzling." Books that I've written are "Clash with the Immortals, and eleven others which are part of the "Unholy Pursuit saga,". She has been working on the Chronicles since 2007. She wished to complete them all before introducing them to public so the readers wouldn't have to for the continuation to be written. The ideas of the book come from classic literature such as whose work greatly influence the world world such as Homer, Sophocles, Herodotus, Euripides, Socrates, Hippocrates, Aristophanes, Plato, Aristotle and many more. The "Book of Enoch" influenced the usage of Azazael as a main character and love interest. I created the primary main character from the Chronicle of Saints. I wanted to show them as real flesh and blood with thoughts, desires and yearning as any human. Not as they are so often depicted. So I created one of my own to show her as a real human that everyone can relate to.
View all posts by unholypursuit →
This entry was posted in ANNOUNCEMENTTS, Supernatural, vampires, writings and tagged Atmospheric sciences, blue, glowing, jupiter, magenta, mercury, orbs, planets, purple, sky, ufo, venus. Bookmark the permalink.

2 Responses to Purple and Magenta Sky. It was beautiful!