Back To School Prayer

This entire week I have seen new students arrive with their parents anxious and nervous about their first year of college, or seasoned students return. The pre-schoolers through high school seniors can be seen about town preparing for the upcoming school year.

I know this shouldn’t be on my mind with a new school year starting but considering the past school term, I can’t help but pray that we have a safer year. That we learn from the heartaches, the tragedies of the past years brought to many hearts and do not repeat the wrong-doings of the past. 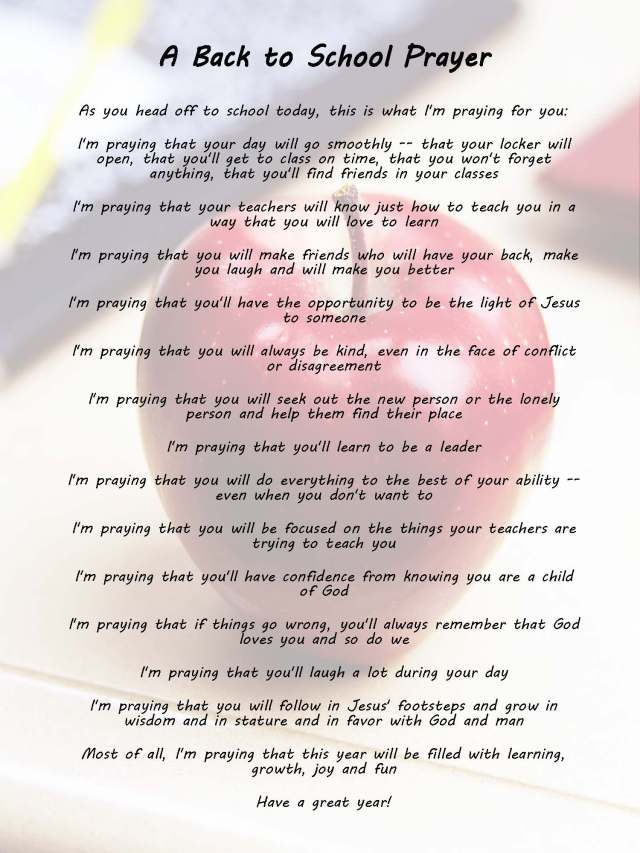 A. White, an award winning former librarian, who is also a long time member of Romantic Time and Publisher's Weekly. A. White has been writing for over fifteen years. She took classes in creative writing in college, specializing in ancient myths and legends. and later at a local community center while living in Chicago. In college she won the national contest to verbally list every country in the world, it's capital and ingenious language. Her works are mainly horror, fantasy, extreme, and sci-fi as well as, as some may says, "the truly strange predicament and puzzling." Books that I've written are "Clash with the Immortals, and eleven others which are part of the "Unholy Pursuit saga,". She has been working on the Chronicles since 2007. She wished to complete them all before introducing them to public so the readers wouldn't have to for the continuation to be written. The ideas of the book come from classic literature such as whose work greatly influence the world world such as Homer, Sophocles, Herodotus, Euripides, Socrates, Hippocrates, Aristophanes, Plato, Aristotle and many more. The "Book of Enoch" influenced the usage of Azazael as a main character and love interest. I created the primary main character from the Chronicle of Saints. I wanted to show them as real flesh and blood with thoughts, desires and yearning as any human. Not as they are so often depicted. So I created one of my own to show her as a real human that everyone can relate to.
View all posts by unholypursuit →
This entry was posted in advice, angels, ANNOUNCEMENTTS, author, Climate, confidence, diversity, Encouragement, life, love, Parent, Personal thoughts, Prayer, truth, Violence, writings and tagged college, Encouragement, grade school, middle school, school, students, teachers. Bookmark the permalink.

2 Responses to Back To School Prayer