Perpetual Rage-Takes over when enough is enough.

It’s the year of 2043, forty three year old Lori James Smith whose nicknames included Smithy and Tall Lori was born on a Sunday morning, 31st December 2000 as the old year turned into a new year of 2001 unto a decent, hard working class Protestant family in a modest sized city in northern California called Muddon.

She earned her Bachelor’s degree in Sports Science from Stanford University. She chose this career path because she’s tall, slight underweight, and blessed with an athletic built that borders average. Her hair is an odd grayish brown hue but she experienced bad hair days for years in trying to dye it blonde which never quite comes right.

She never set out to make waves in any social nor political agenda or field; her political views are centre, she believes in the old motto: “To each their own.”

Misfortune strikes, ending her first chance at matrimony bliss. She became a widow at age 21 when her new husband Reece Percy Stewart was killed within three months of their short marriage. The killer was never found but realizing she had to continue with her life without him she threw herself into her work.
“I don’t know exactly when this inconsumable rage entered my heart and took up residency and now refuse to leave.” Lori thinks. “But I do know revenge is a dish best served cold.“

It’s a story akin to “Kill Bill“.  Unlike Kill Bill, Lori was never a paid killer. It’s a story of a woman taking back her life after a lifetime of abuse. This one is a stand-alone. 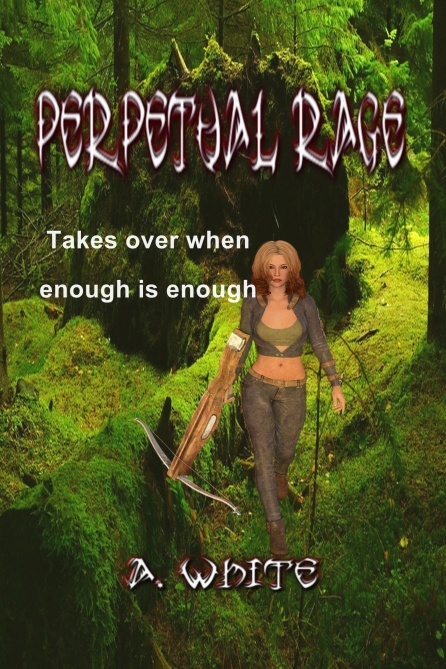 I am hoping it will be published next year.

A. White, a former librarian who is also long time member of Romantic Time and Publisher's Weekly. A. White has been writing for over fifteen years. She took classes in creative writing in college, specializing in ancient myths and legends. and at a local community center while living in Chicago. In college she won the national contest to verbally list every country in the world, it's capital and ingenious language. Her works are mainly horror, fantasy, extreme, and sci-fi as well as, as some may says, "the truly strange predicament and puzzling." Books that I've written are "Clash with the Immortals, and eleven others which are part of the "Unholy Pursuit saga,". She has been working on the Chronicles since 2007. She wished to complete them all before introducing them to public so the readers wouldn't have to for the continuation to be written. The ideas of the book come from classic literature such as whose work greatly influence the world world such as Homer, Sophocles, Herodotus, Euripides, Socrates, Hippocrates, Aristophanes, Plato, Aristotle and many more. The "Book of Enoch" influenced the usage of Azazael as a main character and love interest. I created the primary main character from the Chronicle of Saints. I wanted to show them as real flesh and blood with thoughts, desires and yearning as any human. Not as they are so often depicted. So I created one of my own to show her as a real human that everyone can relate to.
View all posts by unholypursuit →
This entry was posted in abuse, anger, dating, depression, family, father, fierce, history, Parent, Personal thoughts, revenge and tagged revenge, righting wrongs. Bookmark the permalink.

4 Responses to Perpetual Rage-Takes over when enough is enough.